Br. Ben Cusack CFC – named as Cork Person of the Month for Feb 2021 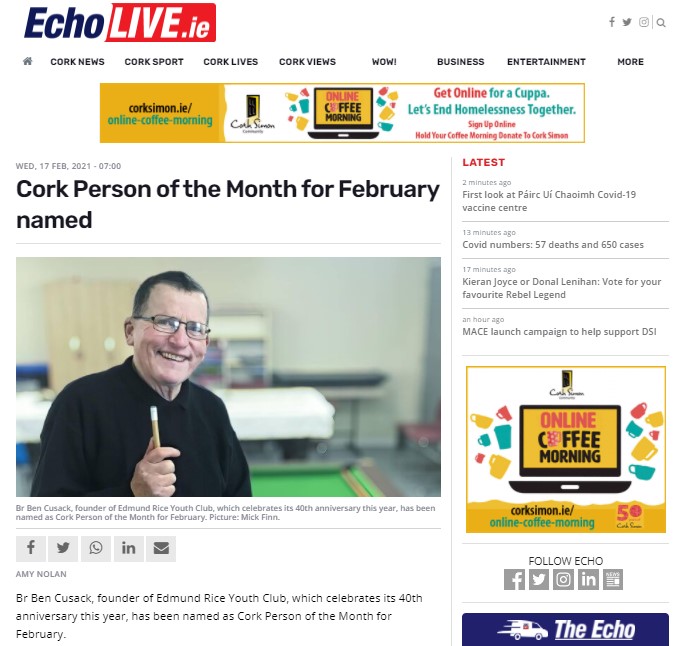 Br. Ben Cusack CFC has been named as Cork Person of the Month for February 2021. See attached link.

Br. Ben has made an extraordinary contribution to educational leadership, youth mentoring and formation in Cork, for four decades.

He was Principal of Sullivan’s Quay C.B.S. for many years. In 1981, he founded the Edmund Rice Youth Club, which celebrates forty years this year and is still going strong. He is deeply involved in the educational and sporting life of the city. He volunteers support to Coláiste Eamann Rís Deerpark, Greenmount N.S. and St. Joseph’s N.S., Mardyke.

THE L.E.A.F. PROJECT was very happy to nominate Ben to the Cork Person of the Year Awards Committee. That nomination was accepted and today news has been released to local media that Ben is Cork Person of the Month for February! A great achievement for a Waterford man!

A very modest person, Ben attributes the success of all his endeavours to the team of generous volunteers and support people he has gathered around him.

Since the Christian Brothers community house in Fairhill closed, Ben has stayed with the Presentation Brothers Community, Mardyke House, forging another link between our two Congregations. Comhghairdeas Ben!

We congratulate Ben, and the community of people associated with the Youth Club on this honour. We wish him happiness and health as he continues his great work.

(If you wish to email good wishes to Br. Ben, we will pass on any messages received).